Full Consciousness is a vibrational state of being that requires each physical form species ​to contain an individual and incarnating Soul [HigherSELF Heart]. 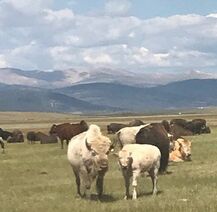 Photo taken in Park County, Colorado in 2018 by J. Sais
You may have heard of the White Buffalo. The first full consciousness birth began in the 1990's, and a number of white calfs upon Earth are birthed per year ever since. The white buffalo represents the return of full consciousness for the buffalo species. The production of a white calf should not be possible given the previous genetics the buffalo held, for all hair color of the buffalo species was brown or black for a very long time. The white hair of the newborn buffalo is the result of the buffalo specie conscious choice to override the genetics of the form to produce white hair, or hair without pigment.  The collective buffalo kingdom choose to override the genetics to produce white calves. This is an example of a specie kingdom on Earth consciously altering the genetics of the physical form.

There is much for humanity to learn about the white buffalo.  For the buffalo kingdom aligned to ascend with Earth and to show humanity how this is done, and with this choice to ascend, they transmuted the physical buffalo form to the unity cellular structure for the purposes of the restoration of full consciousness within the buffalo species.
​

What does full consciousness mean?

Full consciousness means that each individual form serve Earth as a whole in all agreed choices and actions.

Humanity, as a species must choose to restore the human physical form to full consciousness. Earth is ascending, and the higher Earth moves up in frequency, the more support Earth requires in the maintenance of her evolving field.  The buffalo, as a unity group understood that Earth required such support in her transition, this also applies to  all other land mammals choosing full consciousness in each respective evolution.  Similar to the Buffalo, mankind is a conscious species that lost consciousness.  Therefore, mankind must choose to restore the human physical form biology to full consciousness if we are going to survive the coming centuries upon Earth. The purpose of the physical form is to evolve. The Buffalo kingdom did not forget this fact, and longed for the day in which this evolution might begin. The time is now, and there is no time for mankind to delay.

Everything will change. Non-aligned thought-form and technology will not make the shift into the coming dimensions. Only that which is conscious will survive. That which is conscious is all species upon Earth, including the plant, animal, mineral, and  humans whom are awakening. No things within our world that do not align with unity will remain, for as Earth's vibration reaches a high enough vibration that which is not in alignment will dissolve. Including all non-aligned material creations and technology that we perceive to be important. None will be a part of Earth's future ahead.  Humanity at large is lost to know that there are great changes ahead.  Therefore, each human must learn to consciously transmute the form just as the Buffalo began in the 1990's.

Why does the physical form require transmutation?

The current cellular structure does not hold enough energy to move with Earth from one dimension to the next. A new cellular structure must be created to hold a higher vibration and more energy. However, such a cellular structure is not new, past ancestors held such a structure long ago. This structure of the past, must then be embodied a little at a time, until a human holds increasing higher frequencies day to week to month to year. And this is how specie kingdoms are ascending.  Earth requires mankind to participate in her ascension. Without some of the human form ascending, all karmic records are not understood, therefore, all history is not known for Earth, and this shall create a problem and potential disasters rather than a gentle future ascension. Earth is rising above the thought-form of right and wrong, victim and victimizer, abuser and abused.  With this rise everything upon Earth must rise above such thought-form.

The vibration of Earth is quickening. As Earth quickens, that which does not quicken with her shall become ill, with more energy running through the form than the dark created form was designed to handle. As more energy runs through the etheric body, this exacerbates the blockages or stuck regions of the form causing disease to manifest more rapidly than before. The higher in vibration Earth goes, the more rapidly those who are not ascending shall become diseased. Humans are not exempt from the responsibility they inherently agreed  to live upon this land. Each human has agreements to support Earth in her choice to ascend. Most humans are not aware of this agreement. Ascension brings forth completion and completion creates a new experience, a new consensus for Earth; a new consensus filled with unity, joy, harmony and balance. There are many advocates for peace, however, the peace they search for shall only be found as humanity chooses to ascend and chooses to release all karma for warfare. There is no other way, for all other ways have failed in the past 120,000 human years of human history. Therefore, repeating the same results over and over again will not create anything everlasting without ascension, for all other ways have been tried, and have failed time and time again. Earth's current and future experience is a living breathing dark consensus reality that has boundaries that state "this may occur upon a global level" and "this will not occur upon a global level". Global level occurrences are complex in manifestation and Earth is now transcending destructive thought-form, and humanity must also choose no further destructive dark games on Earth.